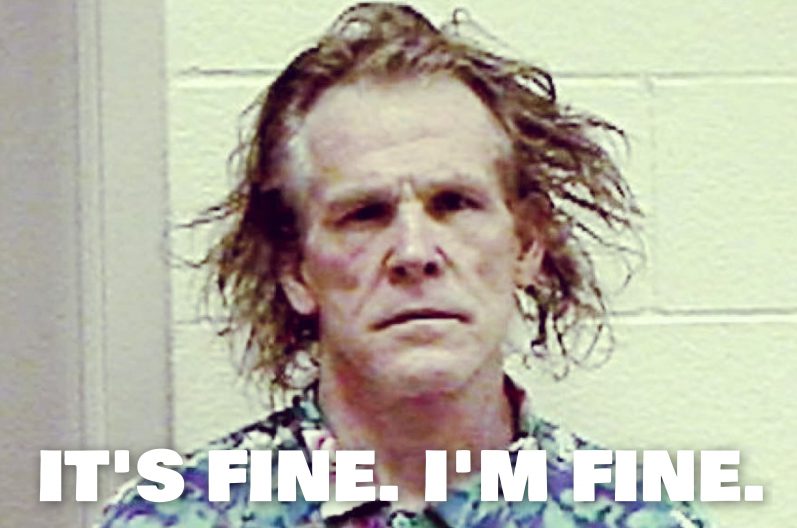 Last Monday morning, a 6-year-old girl roasted me at the bus stop.

It was 8:15 a.m and I repeat, ON A MONDAY. My kids and I crossed the street from our house and waited at the end of our neighbor’s driveway for her crew to meet us for the trip to the corner. My neighbor came out with 3 little girls, my attacker (let’s call her Elizabeth) included. I smiled and said “Hey guys!” as they joined us on the street.

Elizabeth isn’t from the neighborhood. My neighbor babysits her little sister (whom we’ll call Elizabeth’s sister) and every now and then she comes along for the walk. This made her sick burn even more ruthless, a scud missile to the heart.

Elizabeth’s outfit stood out to me on this crisp, autumn morning. I’m not one to judge a kid’s clothes because, let’s be honest, reasoning with a 6-year-old about their outfit is as useful as a feather fork, but I was kind of digging her look. She had on a royal blue shirt, a pair of navy retro style gym shorts (you know the ones, with the white piping), a pair of white tube socks pulled up to just below her knee and sneakers. I thought, “You go girl! It’s not 100% working but you’re rocking it and I like that about you.” I was happy for her, and convinced she was a free-thinker, I gave her a mental high-five. On we walked.

The bus stop crowd made our normal early a.m. small talk. The bus came, we blew kisses to the older kids as they rode away and we turned to walk back to our homes. It was me, my son (also 6), my neighbor, Elizabeth and Elizabeth’s sister. I looked down to my right to see Elizabeth smiling up at me, a face like a jack-o-lantern with 3 or 4 teeth missing. So cute. “Hey you!” I said. She made direct eye contact with me, grinned sweetly and then…she daggered me.

“You have a sleepy face, ” she said. I’D BEEN UP FOR 2 HOURS. I politely laughed, in my head thinking “SHOTS FIRED! WE HAVE SHOTS FIRED!”

What I would’ve said if it was one of MY kids was something along the lines of, “UUUHH, YA THINK? Well, maybe if you weren’t wedged up my buttcrack last night and if your sister hadn’t decided to hold a U.N. Sleep Summit in her underwear at 2:30 a.m., lecturing me on how UNJUST it is that you get to sleep between Daddy and I and how her brother gets WHATEVER he wants, YEA, maybe I’d have more of a Brooke Shields Blue Lagoon thing going on right now.”

Of course, I couldn’t say THAT. She was someone else’s baby. What I WANTED to say to her was, “Listen, kid-dressed-up-like-a-Harlem-Globetrotter-from-1982, it’s Monday morning. I MAY or MAY NOT HAVE had way too much wine to drink on Saturday and I MAY or MAY NOT still be hung over. You want to ask questions? Halloween’s not for another 2 weeks, so how come you’re dressed like a hipster on her way to a kickball game in a Williamsburg park? Does Tootie from The Facts of Life know you stole her gym clothes? How about you lay off the judgement and stick to eating your own boogers? OKAY, PAW PATROL?!”

Of course, I couldn’t say THAT either. I probably had Cheez-it crumbs in my hair and (most likely) no bra on and in my fragile state, I was NOT taking a chance on her launching another bomb at me. So I just mustered up the 1/2 ounce of dignity I had left, giggled and looked down at her cute, toothless face and said, “Yea, that’s just my normal face.” She just kept smiling and globe trotted her way down the street.

It’s fine. Elizabeth’s right. I’m exhausted. In her defense, I’m sure I looked like a Nick Nolte mugshot. Sleeping soundly is a thing of the past. It’s an occupational hazard of motherhood. It’s like musical beds in our house every night. We give in to our kids’ nocturnal demands because, at this point, we just want everyone to sleep. Still, no woman nearing 40 likes to be told she looks tired, even if it’s from a toothless kid in Danny Zuko’s track outfit from Grease.

When my daughter was born in 2007, I remember boasting to one of the men I worked with, a father to two teenage girls at the time, that there was NO WAY MY KID would EVER sleep in our bed. He’s a lovable, no BS Italian guy from Brooklyn. He looked at me and said, “What the f&ck is the matter with you? Don’t you know that kid’s not going to give a crap about you in about 15 years? LET HER SLEEP IN YOUR BED IF SHE WANTS.”

As new moms, we think we’ll stick to all of the pre-conceived parenting plans we made BEFORE SHIT GOT REAL. No red dye 40. ORGANIC EVERYTHING. No high fructose corn syrup. And 10 minutes later we’re like:

I guess it’s hard to admit we want to give up on some of the things we swore by once the rubber really hits the road. But this is one new mom promise I’m going back on. I’ll play along in a round of midnight musical beds or scooch over to make room for a beautiful little monster if I need to. So what if it means a crappy night’s sleep? A kid’s size 11 foot up my butt at 2:30 a.m. will just be a sweet memory someday, even though now it makes me look like a swamp creature at the bus stop.

About The Mother Octopus

The Mother Octopus is Katey DiStefano, a northern NY girl living on Long Island, mother of two, freelance writer/meme maker/content creator and octopus lover. This blog is my attempt to put some action back into my passion for writing. Follow along for some laughs and an honest look at motherhood, humanhood and what it’s like in my part of the ocean.